Teva's brands are leading the market

Teva was founded in 1901 in Jerusalem as a small wholesale drug business. Over the years the company acquired additional local pharmaceutical corporations. In 1976, Eli Hurvitz, Teva’s CEO at the time, formally merged all companies to form Teva Pharmaceutical Industries Ltd. – Israel’s largest healthcare company.
Teva manufactures generic and brand name drugs in Israel and globally, with an expansive line of products covering over 1,000 different pharmaceutical molecules. Acamol and Optalgin are Teva’s two most identifiable brands in the Israeli market.


Competitive Environment
Many Israeli consumers use pain relievers. In the year 2000 the competition in this category was increased with the arrival of new competitors to the Israeli market. 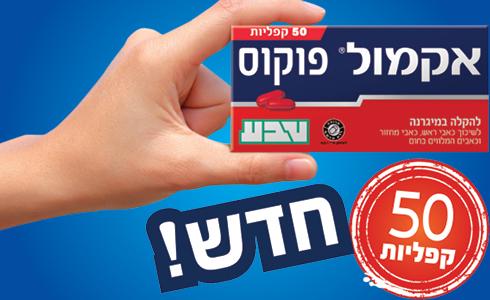 Acamol's new branding for its family of products


Marketing Challenge
Acamol is one of the oldest and most familiar brands in the category. The arrival of new competitors and the resulting changes which took place in the market have raised the need to maintain the brand’s relevancy in order to preserve its market reputation.
In response to this challenge, Teva decided to continue developing innovative solutions under the Acamol brand, with an aim to address consumers’ evolving needs, and to give the brand a “younger” image.


Creative Solutions
In order to address its marketing challenge, Teva decided to establish a single umbrella-brand which will encompass all of Acamol’s sub-brands while communicating a unified tone of voice aimed at providing the brand with powerful visibility and added marketing value.
The unified tone of voice developed for the Acamol brand emphasizes the common aspects of all Acamol products while maintaining the uniqueness of each individual sub-brand. The uniform tone of voice is expressed in a new graphic visibility for all Acamol products packaging – in order to portray a unified language which would also be prominent on the shelf thanks to the large number of products sold under the Acamol brand name.
In a further marketing measure, Teva has launched a series of TV commercials presented by comedian Dov Navon, in which humor is used to express the fact that Acamol is an efficient solution for treating headaches, as well as the fact that "everyone has Acamol". In the commercials Navon is seen in situations in which other people (the uncle in a family gathering, an admirer on the street, etc.), pester him and cause him a headache. When Navon asks “does anyone have an Acamol?” everyone around him immediately pulls out their Acamol, offering it to him. The closing slogan is "Clearly, Acamol". 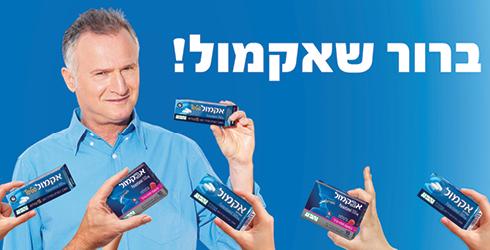 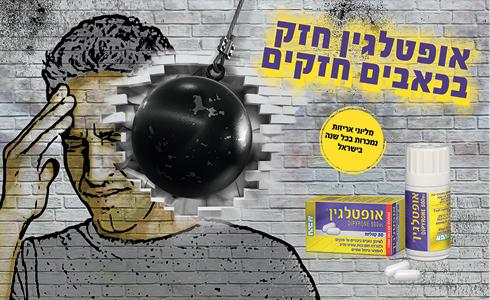 
The Story of Optalgin
For decades Optalgin was sold in Israel as an analgesic for the relief of moderate to severe pain and for reducing high fever that does not respond to other treatment methods. Optalgin is based on the Dipyrone molecule, and was first sold in Israel in 1976 as an OTC drug. Teva sells a number of additional products under the Optalgin brand: caplets (21 and 42 unit packages), tablets, drops (10 ml and 15 ml), and ampules for injection. Optalgin can be identified by its brand colors of yellow and purple.


Marketing Challenge
Optalgin is a well-known brand in the category. However, it is often more strongly identified with the older populations, compared with newer competitors in the category.


Creative Solutions
Teva decided to update Optalgin’s tone of voice, with an aim of increasing the product’s relevancy and attractiveness among younger populations. The new tone of voice was delivered mostly via TV commercials, billboards and print advertisements. In 2013 the brand launched a series of humoristic campaigns presenting situations requiring a solution for severe pain – a football player moaning in pain, a parachutist whose parachute gets caught in a high tree, and more.
In 2015 younger audiences were addressed with a video showing a brick wall with a graffiti of a young man suffering from a headache. The narrator declares that “Something strong is approaching”, when an iron ball appears, crashing the wall (and the headache). The video ends with the words: “Optalgin. Strong for Strong Pain. Millions of packages sold in Israel every year”, while in the background we see a young man/woman smiling with relief.
In addition, this year Optalgin launched a 50 caplet package in a convenient, rattling plastic container. 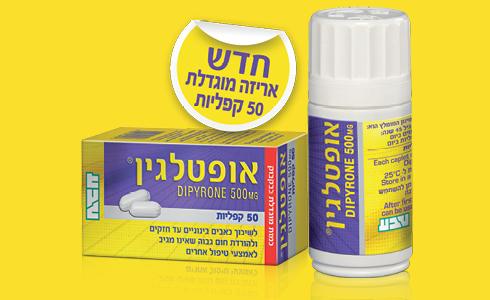 The new Optalgin package is young and smart