Advil puts an end to the marketing headache

Advil, successfully launched in Israel 15 years ago, has become a generic name for pain relief. In 2014, the brand launched Advil Forte – a solution for severe pain

Advil was launched in the USA in 1984, as the first painkiller based on Ibuprofen. The product was instantly successful, and today the Advil brand – owned by multinational pharmaceutical corporation Pfizer – is the leading painkiller in the world (according to the 2014 Nicholas Hall report).
‏Advil was introduced to Israeli consumers in 2000 by Neopharm. Until then, Israelis used to purchase Advil in the USA, and bring it back with them for personal use.
‏Advil Liqui-Gels is based on liquid Ibuprofen contained within patented gel capsules. It is sold over the counter and used for quick and effective treatment of a wide range of pains: headaches, migraines, toothaches, back, muscle and joint pains, and menstrual pain. In addition, Advil reduces fever and also acts as anti-inflammatory.


‏Competition
‏The painkillers category is characterized by a very high penetration rate: 98% of Israeli consumers use painkillers. Most use more than one brand and tend to have more than one product at home. Before Advil was launched, three brands led the Israeli market in this category. These brands had well established positions in the category. 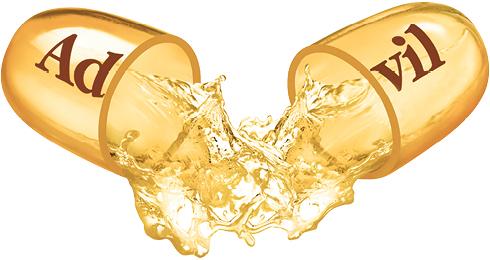 Advil's capsule. A faster way to treat your pain


‏Advil’s Launch in Israel
‏In view of the category’s high penetration rate in Israel and the strength of the existing brands, it was clear to Neopharm that its main marketing challenge would be to transfer consumers from using other painkillers – to Advil. Thus, despite the fact that in all markets where Advil is sold, Advil’s tablet presentation is launched first, and only after its establishment in the market, is the Liqui-Gel capsule launched, in Israel it was agreed that the Liqui-Gels capsules would be introduced first, in order to be significantly differentiated from the existing brands – and offer consumers added value, based on innovation.
‏According to pre-launch consumer studies, the Israeli consumer perceives liquid painkillers as faster and more efficient in dealing with pain, so it was decided that the main marketing message would emphasis the fact that the active ingredient in Advil is a liquid contained within the Liqui-Gel capsule, making it absorb faster and reduce pain quicker.
‏The launch of Advil Liqui-Gels in Israel was well planned and a well-kept secret. The fact that competitors became informed of the launch only when it was already available for purchase at pharmacies, gained the brand a significant competitive advantage. The campaign was comprehensive, targeted at end consumers as well as at physicians and pharmacists.
‏According to the chosen marketing strategy, the launch campaign presented the advantages of Liqui-Gels for quick and efficient pain reduction. The main message of the launch was: “The capsule with the liquid, that makes the pain go away – fast!”.
‏Post-launch consumer surveys showed that consumers understood the communicated messages and advantages, and that Advil is perceived as a fast and efficient painkiller – as well as an innovative, highly coveted product and a maven of new technologies.
‏These activities, alongside a massive public relations campaign, created an immediate demand for Advil Liqui-Gels. Stocks planned for an entire year were sold within six weeks, and within fourteen months Advil became Israel’s leading brand in the Ibuprofen category, taking a substantial segment of the entire painkillers market.
‏To take advantage of the marketing momentum following the successful launch, Neopharm expanded its basket of solutions by introducing two additional Advil products:
‏Advil Kids – a pain and fever reducing suspension for kids, with fruit and grape flavors, was launched in 2002.
‏Advil Cold & Sinus – for relief of the symptoms of influenza, common cold and nasal congestion was launched in 2007.
‏With the implementation of the new regulations enabling selling Over-the-Counter medicines in Israel outside pharmacies, Advil became the first painkiller in the Ibuprofen category to be sold in this manner, thereby opening a new distribution channel in which Advil has gained market leadership. 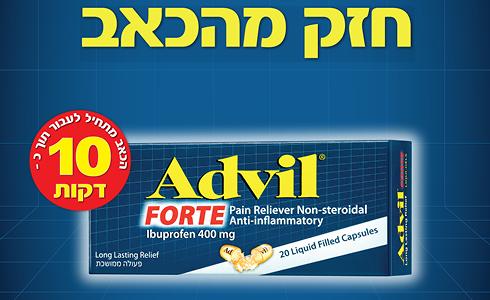 Advil's activities give a real headache to its competitors
‏

Revising the Marketing Message
‏After a decade of consolidation of Advil’s position among consumers, the brand faced new and meaningful challenges: to increase its market share in a crowded and competitive category – and to ensure that Advil remains consumers’ first choice.
‏In order to match the brand’s marketing strategy to the present point in the product’s life, Neopharm conducted a series of comprehensive market studies, analyzed alongside conclusions from global consumer studies which Pfizer had shared with Neopharm’s marketing team, aimed at gaining an in-depth understanding of global consumers as well as of the unique characteristics of Israeli consumers.
‏According to the studies, the most important parameters for the consumer upon purchasing painkillers are: speed of action, efficiency and safety of the solution – all parameters in which Advil has an advantage. It was also found that the speed of action message, which was the main message leading the brand’s marketing activities over many years, was well internalized by Israeli consumers.
‏As a result, Advil in Israel changed its message to: “Advil is stronger than the pain”.
‏The new strategy proved itself and the brand continued to grow in recent years, as has its perceived effectiveness among consumers.


Launch of Advil Forte
‏As in most consumer categories, also in the painkillers category, growth comes from innovation. Accordingly, and in order to truly address consumers’ needs, in January 2014 Neopharm launched Advil Forte 400 mg – a painkiller providing an effective solution for severe types of pain such as migraines, backaches, toothaches, and more.
‏The inclusion of Advil Forte in the brand’s portfolio of solutions was a natural step forward, since even before its launch, Advil was perceived as the consumers’ preferred brand for treating severe pain. Therefore it was decided at Neopharm that the new product would be launched under Advil’s marketing strategy, and would be communicated via the same language – as it is a direct continuation of the brand’s marketing emphasis on its strength.
‏The product’s launch was accompanied by a TV and internet campaign with the message: “Advil Forte. Starts to relieve the pain in 10 minutes. Up to eight hours free of pain. Advil, stronger than pain”. The campaign emphasized the fact that the liquid in the capsule is quickly released in the body, removing the pain, while explaining that the product is suitable for treating different types of pains.
‏Results: following the launch, Advil has further increased its sales in the painkillers category. In addition, studies conducted by the company have shown that Advil receives the highest levels of consumer loyalty and satisfaction in the painkillers category.

Things You Didn’t Know About Advil